Equipment is one of the most important elements of Eternal Evolution. It is used to equip heroes, granting them improvements to certain stats. This topic is very complex and should therefore be illustrated in this guide.

Outline: I: Where to Get Equipment, II: Boost and Equip, III: Stats and Set Bonuses, IV: Which Gear for which Hero

If you have any questions about the guide, you can contact @Twinkie#2253 on Discord.

I: Where to get Equipment

You should try to reach level 10 as quickly as possible in order to be able to get legendary equipment. If level 10 is still too difficult, you should fixate on mythical equipment that can be obtained from level 6.

In the Deesa Caves you can only get 2x set bonuses. That means you have to equip two pieces of equipment to get a certain bonus.  For sets, see III:Stats and Set Bonuses 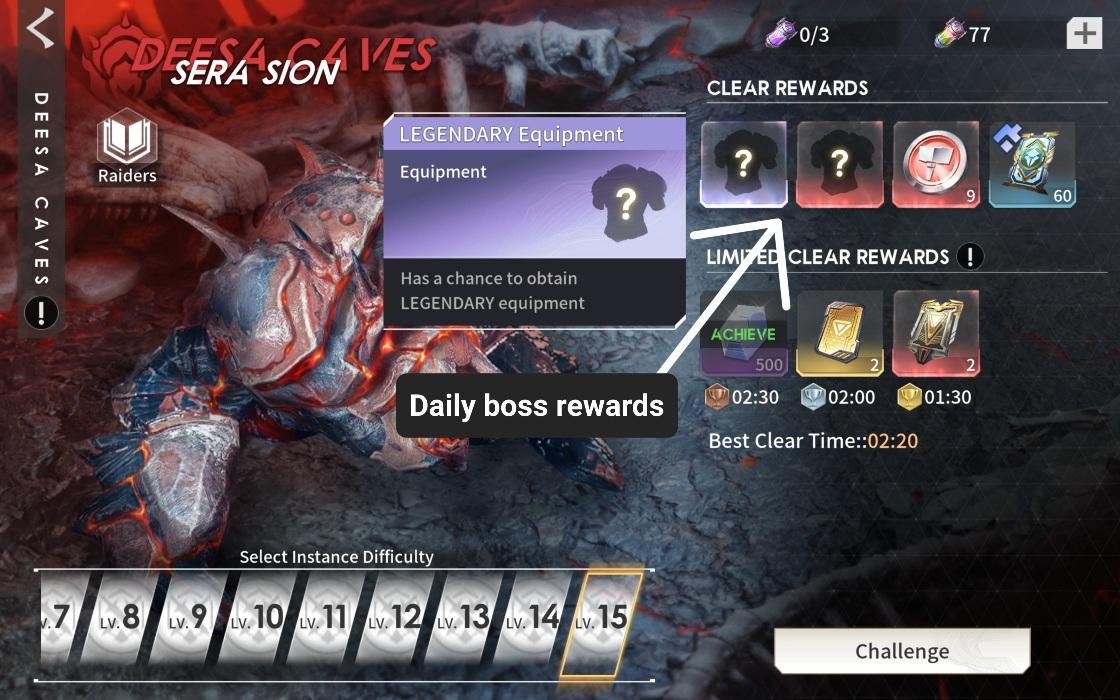 This mode can be played twice a week. See “Eternal Evolution Demon Altar Guide” for details.

While the focus in this mode isn't just the equipment like in the previous mode, you still get quite a lot of it. Furthermore, you can only get 4x set bonuses here. It is important to play both modes to get good gear. 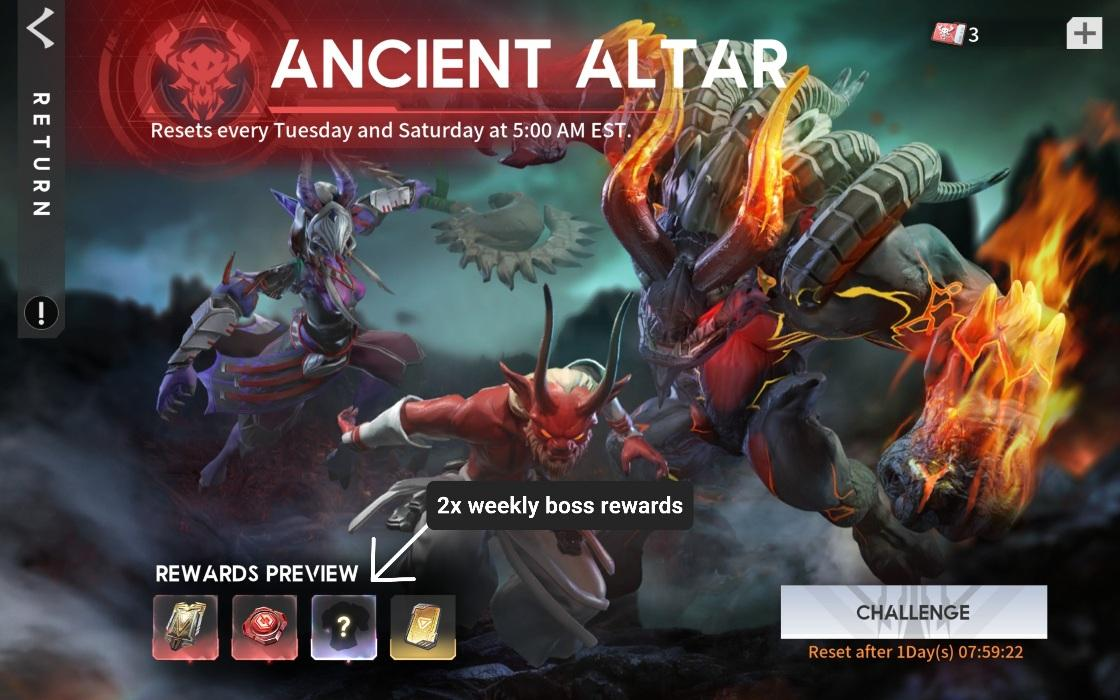 Gear can be viewed and upgraded from either Bag - Equipment or Heroes - *Select Hero* - Equipment.

Equipment can be upgraded either with "Metallize", which is obtained through various activities, or with other equipment. Using fully upgraded gear to upgrade other gear will not cause any loss of experience. equipment that is not needed can therefore easily be “recycled”. Upgrading equipment increases its stats. More on that under “III: Stats and Set Bonuses”.

To equip equipment, you must choose the hero you want to give the equipment to. Here you can now equip the equipment from the inventory or that of another hero. 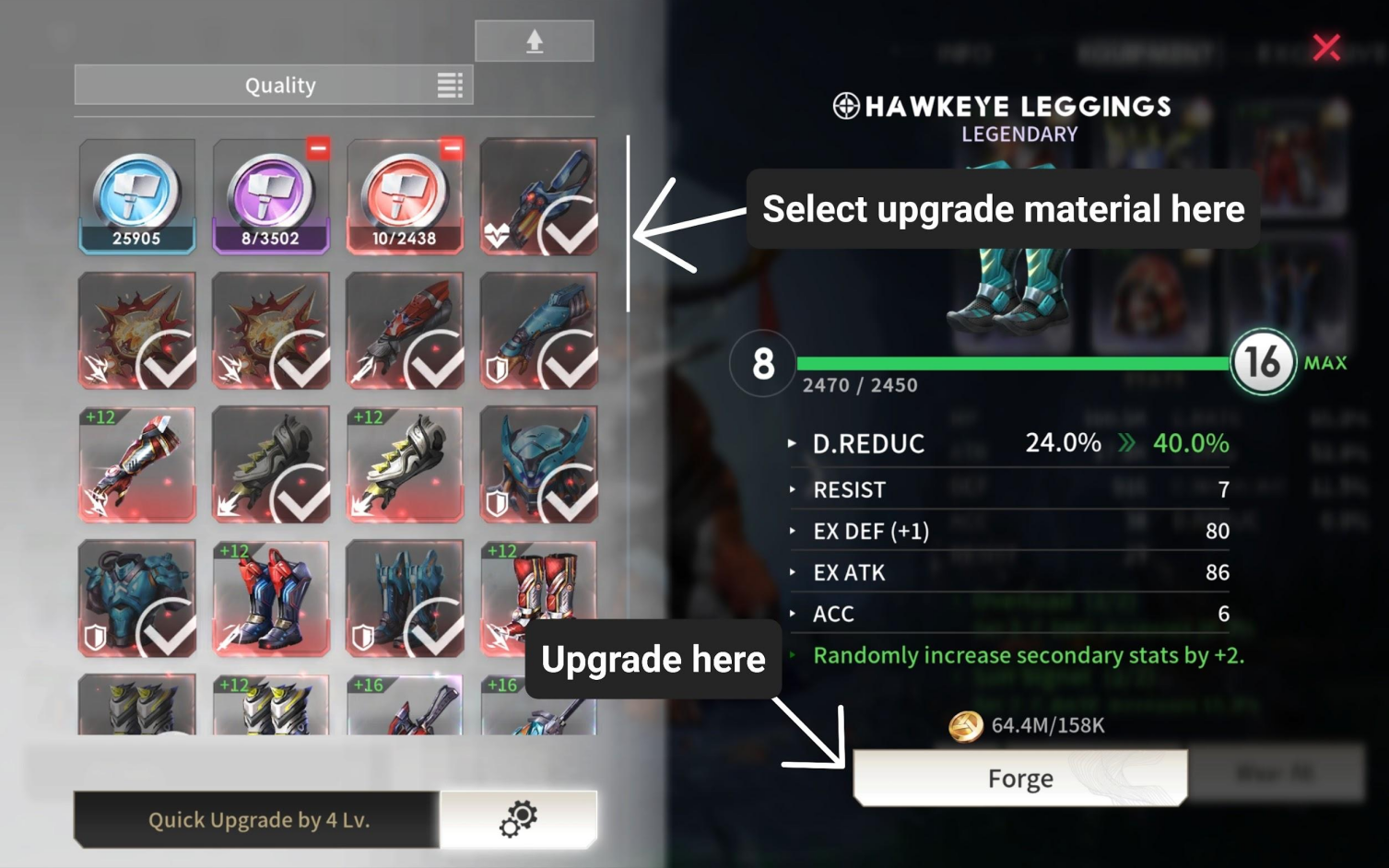 If you improve equipment, the main stat increases. Furthermore, the equipment at Lv4 receives another secondary stat and a random secondary stat is increased to Lv8, 12 and 16 (for legendary equipment). This can be seen from the +1, +2 or +3 next to the respective stat. 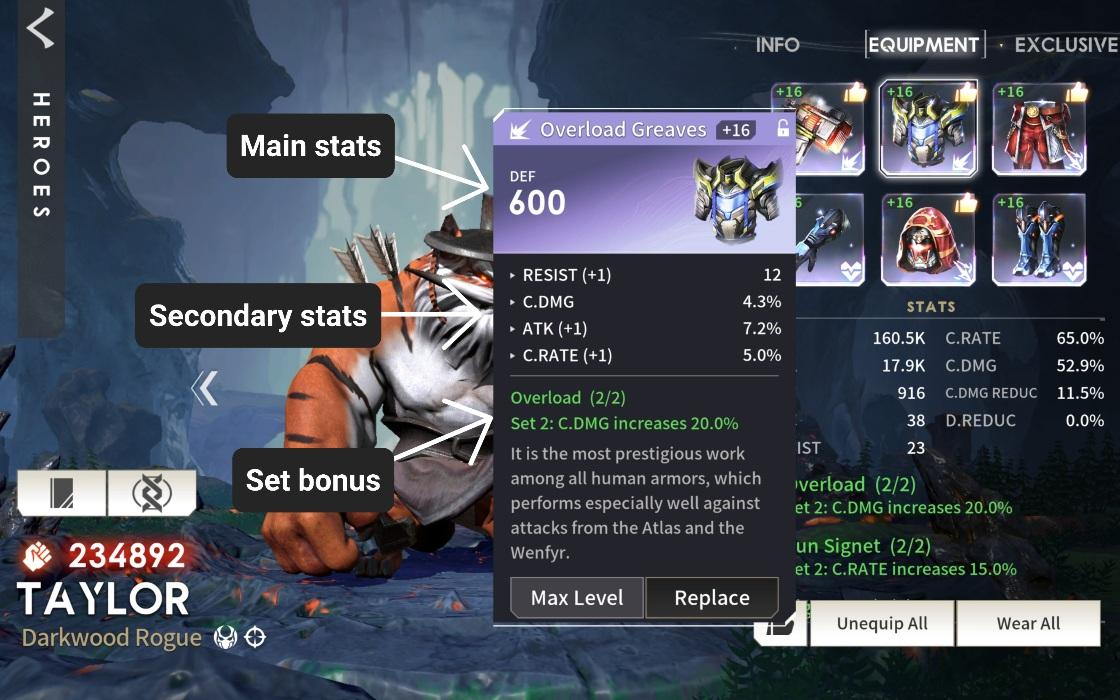 Set bonuses are displayed in green under a part's secondary stats. There are sets of 2 and sets of 4. Accordingly, in order to activate a set bonus, 2 or 4 pieces of the same set must be equipped. Because higher rarity armor pieces have higher main and secondary stats but set bonuses don't increase, the  relevance of set bonuses decreases slightly as rarity increases. Also, set bonuses do not improve with gear upgrades.

Multiple set bonuses can be stacked (for example 3 ATK sets for 45% ATK).

The following is a list of all currently available sets: Sets of

Stats can be roughly divided into into three categories: FLAT, % and EX

Flat stats can be found on the weapon, chest and pants, for example. These are ATK, DEF, and HP stats. These stats count as "base stats" and can beinfluenced by % stats. This means that a pair of pants that gives about 13K HP, for example, gives 19.5K HP if you have another piece of gear that gives  50% HP.

Accuracy and resistance can also be referred to as flat stats. However, these are not further influenced.

% stats return a specific number of % to the given stat. For example, %ATK, HP or DEF add up to the respective basic stats. However, % stats cannot influence each other. So if you have pants with 13K HP and two pieces of armor with 50% HP each, you get 26K HP and not 29.25K HP.

Besides ATK, DEF and HP, there is Crit Damage and Crit Rate. These stats should be self-explanatory and are simply added to each other. Lastly, there's D.Reduc and C.Dmg Reduc. The former reduces damage received and the latter reduces damage received from critical hits. All % stats that somehow affect the hero are added together (ie about 40% D.Reduc from shoes + 30% D.Reduc from the Exclusive + 15% D.Reduc from secondary stats = 85% D.Reduc). However, it is not known exactly how D.Reduc (e.g. at 100%) works.

EX stats are the worst stats and only reasonably good at the very beginning of the game. Just like the flat stats they give you a set number of ATK, DEF or HP. However, EX stats cannot be affected by % stats. They are simply added to the respective total stat. This makes them more useless the further you get in the game.

If it is unclear what a certain stat does, you can click on the info symbol on the right of any hero and then on "Attribute info" on the left. There you will find explanations of the individual stats.

IV: Which Equipment for which hero

Basically, ATK and crit sets should be used for damage dealers and HP sets or main and secondary stats for tanks and healers. But it's not that simple.

Basically, you should know what stat a hero's skills are based on. This is in the description of the respective skills. Most skills scale to ATK. Then it makes  sense to use ATK sets for damage dealers. However, some heroes scale to DEF, for example. Then DEF sets and stats should be used accordingly.

Some heroes benefit from high crit rate (e.g. Taylor, Bailey Hudson) and some from high accuracy (e.g. debuff supporters like Rez or damage dealers with stuns like Sorietta).

Accuracy increases the chance that a debuff takes effect and resistance decreases it. However, how exactly these stats work is unclear.

In addition to the sets of 2 just mentioned, some of the sets of 4 are also useful for some heroes.

2. Strengths and build of each hero + sets

Only heroes that are reasonably good are listed. B tier and partially A tier heroes are ignored.

With "Build" you should primarily use the stats that are not in brackets. The stats in brackets are less good, but not useless for the respective hero.

Two to four useful sets are listed for each hero. Although the sets are recommended, others can also be used.

- Strengths: Increases own AS